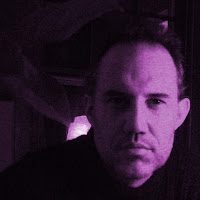 In an Interview with Way Art’s Denis Luzuriaga, Denis talks about how he achieves stylish and contemporary images as a freelance illustrator. His well designed images are in high demand. He always liked art as far back as he can remember and his exposure to diverse cultures and languages influenced his work greatly. Born in Quito, Ecuador, Denis grew up in Ecuador, Brazil and the U.S. After graduating from The Ontario College of Art and Design in Toronto, Denis began his career in Frankfurt Germany assisting a commercial illustrator and eventually partnering with him. He moved back to the U.S in 1990 and formed The Art Bureau. His interests include film production, photography, painting and music production. Denis is currently living and working in Western Massachusetts.

Your work is appealing because of its contemporary 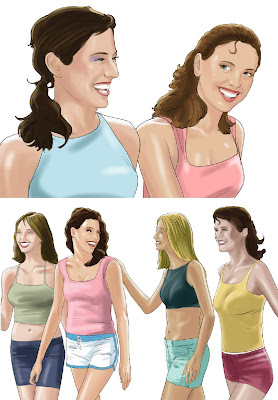 look. How do you decide what a particular character will look like?

Denis Luzuriaga: Thanks. I think it is very important to establish the look of the characters with the creative team. Often the team will provide their own swipe as to what they have in mind. This helps me immensely. I can then concentrate on making the characters look sleek, stylish, cool, or even goofy. Whatever the script calls for.

Where do you get your inspiration?

DL: What inspires me most is other artist’s work. I often find myself saying “wow, I could never do that.” but I most certainly take away something by simply looking carefully and studying their technique.

How did you get started in the advertising business? Who trained you?

DL: After graduating from Ontario College of Art and Design in Toronto, I moved to Frankfurt, Germany where I met an English illustrator who had been in the business for some time. At first, I was his assistant but eventually we became partners. I learned a lot from him; not only the technical aspects but also the importance of working well with a good creative team.

Describe your process from start to finish when you are hired to do an animatic. 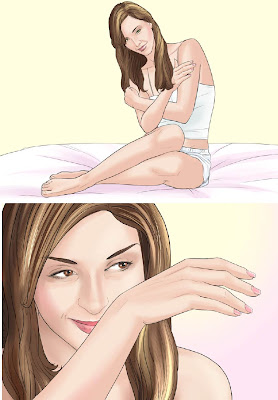 DL: After the brief, I commence the swipe research phase. This is an important part of the process because it will, to a large extent, determine the look and feel of the animatic. If the script calls for a man in his twenties, and the product being advertised is, say, a shaving cream, then I will look for reference for that character on the web using one of the image search engines, as well as in glossy magazines. Magazines are a great way to stay on top of current trends, which I make sure to use in my illustration. If I don’t find the exact swipe for specific positions of a character, then I sometimes photograph live models. Following this, I begin the sketch phase and eventually finish the artwork in color. For the last few years I have worked entirely in the digital domain. All the drawing and coloring is done using a screen tablet. With a “digital pen”, I draw directly on the screen surface. The finished product is delivered as separate frames, which often are layered. Each layer contains specific items such as backgrounds, moving parts (such as loose arms, heads, etc.).

How has the computer changed your art?

DL: I don’t believe computers have changed my art per se. As previously mentioned, I now work exclusively in the digital domain. Prior to using a screen tablet to draw on, I used a simple graphics tablet with a traditional screen. This was ok for coloring but was very difficult for actually sketching a drawing since you are looking somewhere other than where your hand is. This meant that the sketch/drawing phase was done traditionally with pen/pencil on actual paper and then scanned in. Ever since I acquired the screen tablet, my scanner and light box have been collecting dust. The one important thing however, is that the overall look of my illustration has not changed because of these technical innovations. Computers have allowed me to make changes to artwork more easily but they have not helped me to draw better. I thing this is true for many artists.

To make sure the animatic art is fluid do you test your animation before delivering to the client?

DL: I do sometimes test an animation sequence to see how it looks before I deliver the artwork. This could be as simple as creating an animated GIF file, or by generating an actual movie file. Sometimes I will show these to the creative team so that they know what I had in mind. One example was a “swirling ribbon” which flew in to the scene and ended up forming part of the logo of the product.

How do you handle really tight deadlines and excessive revisions?

DL: I complain to my rep a lot; that’s what they’re for, right? Seriously, I take a deep breath, relax, and get to work.

What was your all time craziest deadline? How did you pull it off?

DL: There are honestly too many to remember. However, being able to deliver artwork digitally has made things a little easier. I remember the “olden days” when I had to factor-in the travel time to get to the client to deliver the actual artwork!