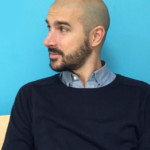 Maurizio De Angelis is an awarded medical illustrator based in London, UK.
Over the last 20 years, his work has been published and broadcasted on different platforms, such as: New Scientist, The Lancet, Financial Times, The Economist, BBC News; and used in the private sector by pharmaceutical and biotech companies.
Maurizio predominantly works using 3D applications and his artistic style is realistic, colourful, detailed and scientifically accurate, with subjects spanning from surgical step-by-step procedures to microbiology and general anatomy.
Alongside his career as a medical illustrator Maurizio is also a realist painter. After receiving a very traditional Italian art education, he has focused on painting in oil on canvas working mainly on private commissions.