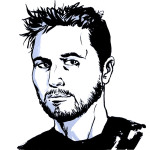 C.M. Butzer was raised in a small town just outside of Portland, Oregon. In 1992, Butzer left Oregon to attend Cornish College of the Arts in Seattle where he earned a BFA in Illustration. After school he worked for Wizards of the Coast before moving to Florence, Italy. There, he met Luigi Galante who ran a didactic illustration studio, Studio Galante. After working for Studio Galante for five years, he moved to New York City to earn his MFA in Illustration at the School of Visual Arts. He currently teaches at SVA.
Aside from teaching and working as an illustrator, storyboard and concept artist out of his studio in Brooklyn, Butzer also illustrates graphic novels. His first novel, Gettysburg, was published by Harper Collins in 2009. He is currently working on a second novel.