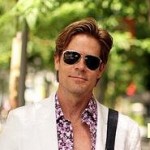 Scott McBee is a New York based artist and designer.   He received his BA in graphic design and illustration from San Diego State University. In 1989 Mcbee launched a successful career in commercial illustration, designing for such major firms as Young & Rubicam, BBDO and Ogilvy.   In addition to his commercial work, which includes advertisement, story board production, and children's book illustration (see Amazon.com), Mcbee has developed several personal projects including a series of large-scale nautical paintings. He is now represented in prominent galleries and museums, including the Chinese Porcelain Gallery in NYC and the Master Works Foundation in Bermuda. Many of his fine commissioned yacht portraits reside in private family collections as well.